Project 2: Identifying In Utero Exposures that Are Risk Factors for Childhood Leukemia

The CIRCLE Exposome Project is identifying novel chemical risk factors for childhood leukemia, focusing on chemical exposures during the prenatal period. The Exposome Project is led by Dr. Lauren Petrick and Dr. Stephen Rappaport. Dr. Rappaport is a pioneer in the field of exposure biology who has called for a paradigm shift in the way that researchers measure exposure to chemicals in epidemiological studies. He is a leading proponent of the exposome concept.

What is the exposome?

The exposome is the lifetime of exposures (coming from both inside and outside of the body) to which a person comes in contact. The exposome concept (originally proposed by Christopher Wild) was made practical by Dr. Rappaport and his colleague Martyn Smith who set out to measure the collection of chemicals that are found circulating in the blood – the blood exposome. The blood exposome provides a record of a person’s exposures to a broad range of environmental agents including radiation, stress, infections, drugs, diet, and pollutants.  Additionally, internal processes, such as inflammation, lipid peroxidation, oxidative stress, and gut flora also shape the blood exposome. 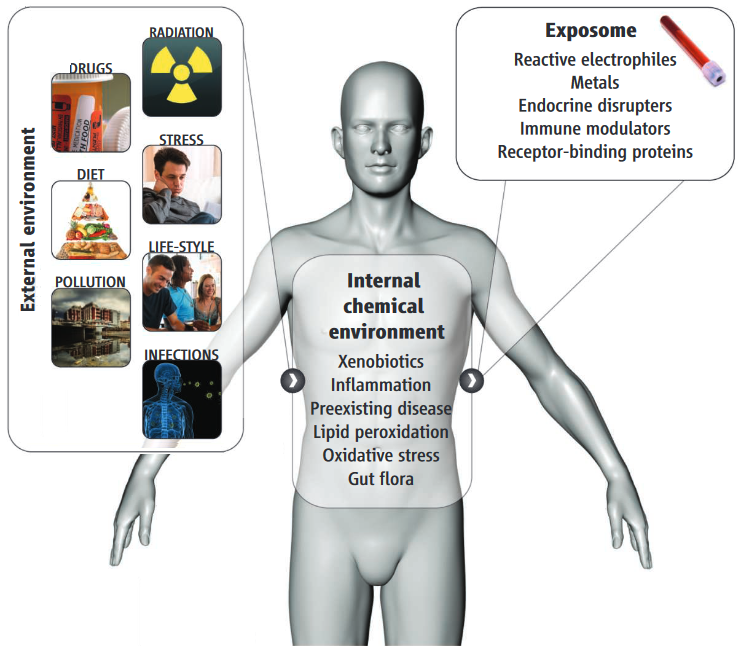 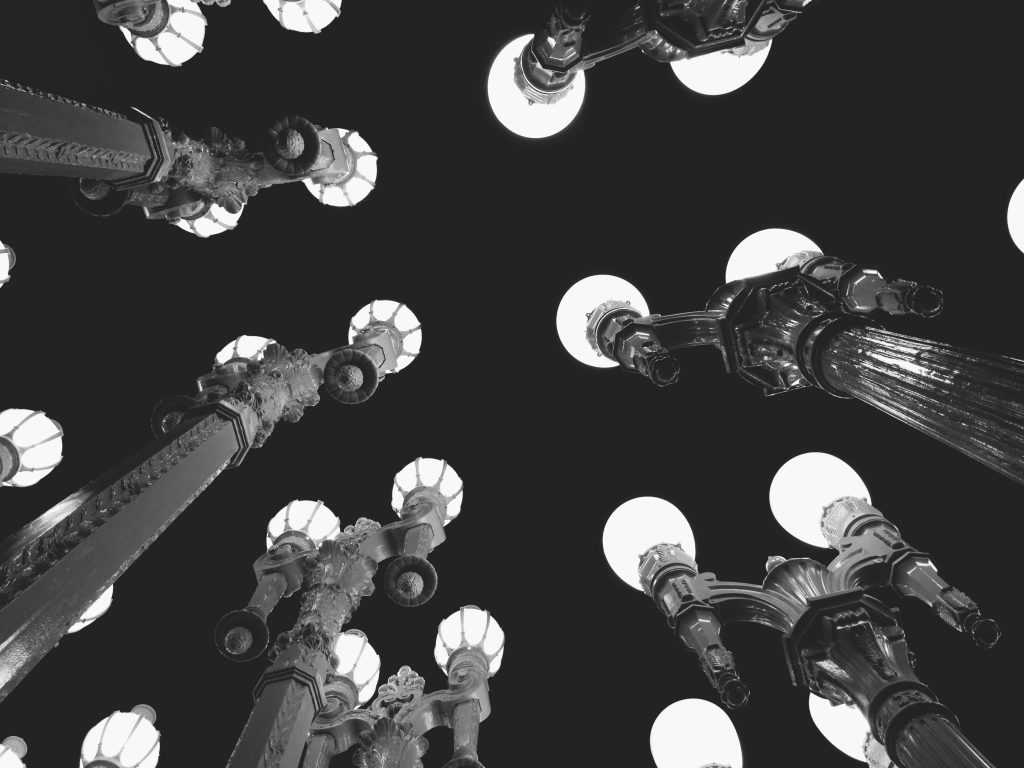 Science is a bit like the joke about the drunk who is looking under a lamppost for a key that he has lost on the other side of the street, because that’s where the light is. It has no other choice.

An Untargeted Approach to Measuring Exposure to Chemicals

There is an allegory about a man searching for his keys under a lamppost which explains why many well-intentioned scientific efforts fail.  In the context of an epidemiological study, the “keys” are important risk factors for disease and the “light from the lamppost” is a validated analytical assay.  Inherently, scientists tend to focus on the assays and chemicals that they know well in their efforts to identify important risk factors for disease.  However, the allegory teaches us that we should also be looking “across the street in the dark”, that is, in the universe of previously unidentified exposures that may be most relevant to disease.  To move away from the lamppost, the project uses an ‘untargeted’ approach, which means the list of chemicals being evaluated is NOT predetermined. An untargeted approach strives to be all-encompassing, providing investigators with an opportunity to cast a wide net in their search for relevant environmental risk factors (including both harmful and protective factors). By design, Petrick and Rappaport are measuring several chemicals which have not been considered as possible leukemia risk factors previously; indeed, some of the chemicals are still mysteries, as their exact structures remain unknown.

CIRCLE’s Lauren Petrick and Stephen Rappaport are measuring 30,000 chemicals in tiny drops of blood collected from children with leukemia and looking for clues about what might cause (or prevent) the disease.

How CIRCLE Measures the Blood Exposome

Researchers have shown that the development of childhood leukemia is a two-step process, which is often initiated before birth, followed by postnatal events leading to the disease. Both steps of the process are triggered by environmental factors such as exposure to microbes or toxins. To describe the neonatal blood exposome, Petrick and Rappaport are using a special resource called neonatal blood spots. These blood spots have been routinely collected from California newborns since 1982. The State of California uses the blood to test for metabolic defects at birth and has archived leftover spots for subsequent use in any epidemiological investigation with the potential to benefit the public health. Using just a fraction of a single drop of blood from each child, CIRCLE investigators can measure thousands of chemicals that were present at birth.  Each laboratory test starts with a 4.7-millimeter punch of filter paper containing about 8 microliters of blood (the equivalent of one tenth of a single drop). Roughly 30,000 chemicals were present in each of the blood spots tested, of which 900 of the most-commonly found molecules were analyzed, including hundreds of different lipids and fatty acids.

Human serum albumin and reactive electrophiles that could potentially form adducts at the cysteine amino acid in position 34. Figure reproduced with permission from Stephen Rappaport.

The goal of the CIRCLE Exposome Project is to identify agents that cause childhood leukemia, especially among those chemical exposures which have not been previously evaluated as risk factors for the disease. To this end, Petrick and Rappaport characterized the neonatal blood exposomes of 332 children with acute lymphoblastic leukemia (ALL) and 324 healthy controls matched by date of birth, sex and race/ethnicity. The study population was divided into two age groups – one for early diagnoses (ages 1-5 years) and one for late diagnoses (ages 6-14 years) – and leukemia patients were compared to healthy controls. In both groups, there were differences observed between the exposomes of the cases and controls, including a set of 9 discriminating chemicals among the younger group and 19 discriminating chemicals among the older group. Interestingly the list of chemicals did not overlap between the two age groups, suggesting that different factors were involved in the development of early- and late-onset ALL.  The late-diagnosis group provided the most interesting findings – with a group of chemicals derived from the essential nutrients, linoleic acid and linolenic acid, being found at higher levels among the childhood ALL patients, suggesting that these fatty acids may be linked to a higher risk for the disease.

What Can the Exposome Tell Us about How Breast Milk Prevents Childhood Leukemia?

It’s not always clear how a particular chemical came to be found in a newborn’s blood spot. What were its sources? However, one important source for many of the chemicals present is likely the diet of the mother during pregnancy. Moreover – because blood spots are typically collected a day or two after birth – the chemical contents of the blood spots can also reflect the newborn diet. By the time the spots are collected, infants would have typically received multiple feedings of either breast milk (colostrum) or formula. Breastfeeding (for a period of 6 months or more) has been linked to a lowered risk for childhood leukemia (a protective effect) by the Childhood Leukemia International Consortium (CLIC) – a group of researchers that pools data from 30+ case-control studies from around the world.

The existing literature – which linked breastfeeding to a lowered risk for childhood leukemia – and the new findings – which showed that linoleic acid and linolenic acid were higher in newborns who developed leukemia than in newborns who went on to have healthy childhoods – fit together like two puzzle pieces. Read CIRCLE’s article “Studies Show Breastfeeding Helps Prevent Childhood Leukemia” to learn more.

… studies published by CIRCLE and other investigators had found that infants who were fed breast milk (colostrum) had lower risks of ALL than babies on formula.  After we detected the association between increased linoleic and linolenic acid levels and ALL risk, we scoured the literature and found that these molecules tend to be more abundant in formula than in colostrum.  This suggests that early feeding with formula may increase ALL risk because it contains higher levels of linoleic and linolenic acids.

Interestingly, levels of metabolites found in our study were also correlated with the mother’s body mass index before pregnancy. Petrick and Rappaport are uncovering an intriguing web of connections between childhood leukemia and small lipid molecules related to newborn and maternal nutrition. This opens the door to hypotheses and follow-up studies that can validate the initial findings and pinpoint the underlying causal pathways. Identifying the causes of childhood leukemia will make it possible to intervene in ways that reduce the risks of this devastating disease.